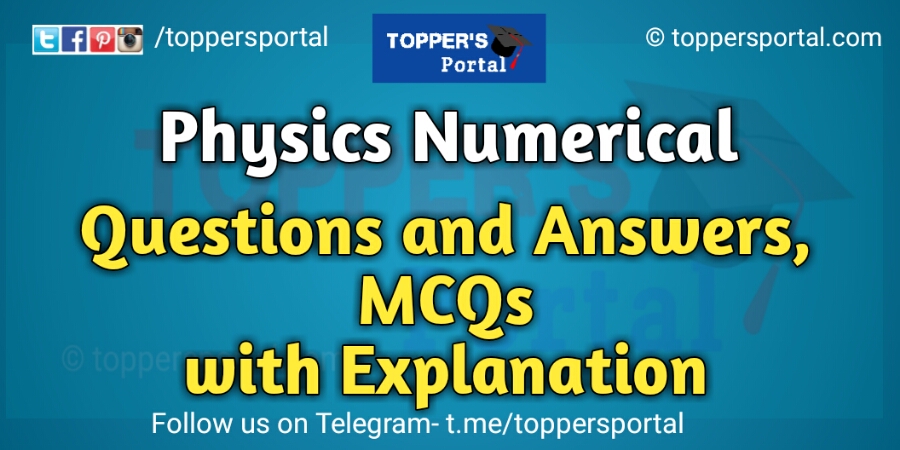 Note: Before looking for the solution, first try yourself, and when it becomes very difficult or if you want to check your solution, only then open the answer and explanation.

I have also provided some questions from your books themselves but with changes in the data. So try solving those questions and put your answer in the comment box. I will surely react to your answer.

Before you solve the questions, let’s revise the important formulas that you read in the chapter Force and Laws of Motion.

Substitution of values in this relation gives F = 10 N

The final velocity can be calculated by

3. A motorcar is moving with a velocity of 108 km/h and it takes 4 s to stop after the brakes are applied. Calculate the force exerted by the brakes on the motorcar if its mass along with the passengers is 1000 kg.

Solve and get F = -7500 N (-ve sign means, the force by brakes applied is opposite of the direction of motion)

Acceleration is given by, a= Δv/t

Now the force is given by

5. A driver accelerates his car first at the rate of 4 m/s² and then at the rate of 8 m/s². Calculate the ratio of the forces exerted by the engines.

Put the value of t and get the Force

Video Solution of Q6, Do Subscribe Also for more Videos. Do you still face problems? Comment there in the video for a reply.

7. Two objects of masses of 100 gm and 200 gm are moving in along the same line and direction with velocities of 2 m/s and 1 m/s respectively. They collide and after the collision, the first object moves at a velocity of 1.67 m/s. Determine the velocity of the second object.

By the law of conservation of momentum,

On substituting the values

It will move in the same direction after the collision

8. An object of mass 1 kg traveling in a straight line with a velocity of 10 m/s collides with and sticks to a stationary wooden block of mass 5 kg. Then they both move off together in the same straight line. Calculate the total momentum just before the impact and just after the impact. Also, calculate the velocity of the combined object.

Now after the collision, they stick together to move with velocity V

Now As per the law of conservation of Momentum, the external force is absent

9. A man weighing 60 kg runs along the rails with a velocity of 18 km/h and jumps into a car of mass 1 quintal (100 kg) standing on the rails. Calculate the velocity with which the car will start traveling along the rails.

Let v be the velocity with which the car start traveling

For Solution, watch the video below. Also, SUBSCRIBE the Channel for more questions

For Solution, watch the video below. Also, SUBSCRIBE the Channel for more questions

13. If a horizontal force of 800 N drags a box across a floor at a constant velocity, then find the force of friction that will be exerted on the box.

Video Solution of Q6, Do Subscribe Also for more Videos. Do you till face problems? comment there in the video for a reply.

15. If a force of 50 N is applied on a heavy box of 50 kg and it doesn’t move. What is the frictional force exerted on the box?

16. A football of mass 700 gm moving with a velocity of 10 m/s is brought to rest by a player in 0.02 s. Find the impulse of the force and the average force applied by the player.

18. What is the acceleration produced by a force of 50 N when applied on a body of mass 5 kg?

20. Find the ratio of SI to cgs units of linear momentum.

21. A bus starting from rest is rolling down a hill with constant acceleration. If it travels a distance of 500 m in 25 seconds. Find the acceleration of the bus and the force acting on it. Consider the mass of the bus 5 metric tonnes.

Video Solution of Q6, Do Subscribe Also for more Videos. Still face problem? comment there in the video for reply.

For more numerical, you can buy this book from Amazon or Flipkart