These are some extra physics problems for class 9 from the chapter motion. Practice these Physics Numerical question to further clear your concepts.

How to solve a physics numerical?

To solve the numerical, firstly read the question carefully, and note down all the given data. You also need to write down the related information. Now try to apply the physics formula given below.

2. An object dropped from a cliff falls with a constant acceleration of 10 m/s2. Find its speed 5 s after it was dropped.

3. A ball is thrown upwards and it goes to the height 100 m and comes down

a) What is the net displacement?

b) What is the net distance?

b) Distance traveled by car (assume motion of the car is uniform)?

5. A bullet hits a Sandbox with a velocity of 20 m/s and penetrates it up to a distance of 6 cm. Find the deceleration of the bullet in the sandbox.

6. An object moves along a straight line with an acceleration of 2 m/s2. If its initial speed is 10 m/s, what will be its speed 2 s later?

7. A particle experiences constant acceleration for 20 seconds after starting from rest. If it travels a distance D1 in the first 10 seconds and distance D2 in the next 10 seconds then,

8. An artificial satellite is moving in a circular orbit of radius 42.250 km (approx). Calculate its linear velocity if takes 24 hours to revolve around the earth? 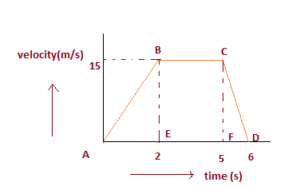 a) What is the distance traveled by the SUV in the first 2 seconds?

b) What is the braking force at the end of 5 seconds to bring the SUV to a stop within one second?

14. A train starting from a railway station and moving with uniform acceleration attains a speed of 40 km/h in 10 minutes. Find its acceleration.

For Solution Go to Page 2

Dimensional Analysis and its Application Notes

ABOUT US
Our goal is to make the learning process easy and everything available at your fingertips, and most importantly free*. Toppers Portal
Contact us: [email protected]
FOLLOW US
© Toppers Portal 2019-20 | All Rights Reserved
You cannot copy content of this page